One is “えいごであそぼ”, which means ‘Let’s play in English’.
This program’s some (original?) musics are pretty good. 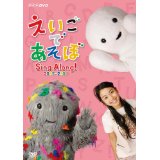